Over the years Celtic Rider has been nominated for numerous business awards, and are recognised as the pioneers of motorcycle adventure tourism in Ireland. Paving the way for motorcycle rental, self-guided tours in Ireland, and setting the high standard for those who dared to follow… Paul Rawlins, director of Celtic Rider Ireland has been accredited with his amazing client satisfaction and savvy business module. Offering clients a complete touring package, from booking their authentic Irish accommodation which generates revenue to parts of Ireland that have been lying idle for years before, to providing riders with their routes on Garmin sat-nav’s, and providing them with top notch well-maintained bikes. Paul helped create the Wild Atlantic Way with Fáilte Ireland, which alone has awoken the tourism industry in the West of Ireland, directing visitors to some unexplored territory’s. Celtic Rider Ireland under Pauls direct control, has designed award-winning self-guided tours for clients wishing to explore Ireland, England, Scotland and the Isle of Man over a period of days or weeks. The future of Celtic Rider looks more impressive then ever. Have a look through some of our past videos, testimonials and awards, and please feel free to contact us anytime from anywhere… 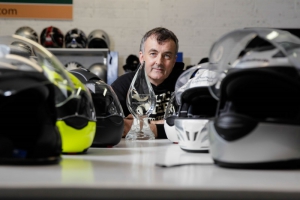 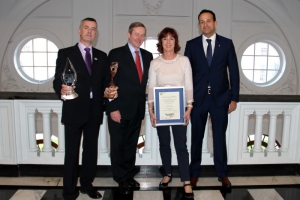 In 2014 Celtic Rider was chosen to lead a tour of the Wild Atlantic Way coastal route with the president, Shannon Stowell and vice president, Chris Doyle of the ATTA, (Adventure Travel Trade Association). The purpose of this 10 day tour was to showcase the growing number of options for the outdoor adventure seeker wishing to experience the breath-taking beauty of the Irish west coastal seascape. Celtic Rider was chosen by Tourism Ireland and Fáilte Ireland, to lead this tour because of Paul’s profound fondness for Ireland and his knowledge of the country gained over a lifetime..

‘Over the years, we have continued to gain recognition and accreditation from commercial and government bodies here in Ireland for what it is that we do. We also have the many plaudits heaped upon us by our customers – just check out our testimonial page for some of these’, Paul Rawlins

Back in early 1976, after just turning 16 years old, Paul’s first fulltime job was as a motorcycle dispatch rider for the P&T (Post & Telegraphs Government Department), delivering urgent government telegrams around Ireland. His bike was a Bultaco 150cc. There were only 20 despatch riders in the squad, and over 10,000 applicants for the job. All were trained by the Irish Army Motorcycle School. Little did Paul realise at the time, due to the influence of many factors, the pure rugged spiritual beauty of our country’s landscape, and the genuine friendliness and hospitality he encountered day after day, that his path in life would eventually be to open Ireland’s first motorcycle rental & touring company.

After only a short few years in business, to be recognised by captains of industry, business leaders, and state bodies such as Tourism Ireland, Fáilte Ireland and National and Regional Enterprise boards, Celtic Rider has been flagged as a truly outstanding small business with outstanding contribution to national tourism.

“Our customers express their true feelings by telling us that their ride in Ireland ranks amongst the ‘best experience of their lives’. Getting up early each morning is easy when you love what you do. Our team are very proud to provide overseas motorcycle tourists with such an amazing experience and of course, to have won no less than 3 national awards in 2013 alone.

Over the years, we have continued to gain recognition and accreditation from commercial and government bodies here in Ireland for what it is that we do.  We also have the many plaudits heaped upon us by our customers – just check out our testimonial page for some of these.”